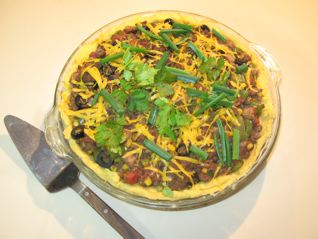 If you’re in a hurry, you can serve this spicy Tex-Mex chili in a prepared pie crust, without the crust, or in taco shells. For an extra flourish, top it with sliced avocado and a generous spoonful of sour cream.

Directions
For the crust: In a medium-size bowl, combine the pie crust mix, cornmeal, sugar, and red pepper. Cut in the butter until mixture resembles coarse meal. Add the water and stir just until mixture comes together.
Preheat the oven to 350°F. Roll out the dough to make a pastry shell. Press the dough into the pie pan and flute the edges. Poke the pastry with a fork in several places to prevent it from bubbling up when cooking. Bake, uncovered, until lightly crisped around the edges – about 20 minutes. Remove from the oven and set aside.
For the filling: Heat the oil in a skillet over moderate heat for 1 minute. Saute the scallions and garlic for a minute or so.. Stir in cocoa, chili powder, cinnamon, coriander, cumin, and salt, and saute 1 minute longer. Add the beef and saute until browned – about 5 minutes. Add the green pepper and saute, stirring occasionally, until soft – about 5 minutes. Stir in tomatoes, beans and corn and black olives.
Spoon the filling into the baked pie shell and bake, uncovered, until bubbling – 12 to 15 minutes. Spoon dollops of sour cream on top of the pie and sprinkle with sliced scallion tops if desired. (Instead of sour cream, we used yogurt and also added cilantro as a garnish)
Recipe from Reader’s Digest One Dish Meals, The Easy Way