Win by Losing: Life Lessons Learned on the Tennis Court

It had been 8 years when I picked up a tennis racquet in the spring of 2012. Before that I had recreationally played tennis a dozen times in 20 years, hitting with my mom and oldest brother. Any competitive tennis? For that, we need to go back to 1987 when I was in 8th grade. I played tennis for my intermediate school and tennis club between the ages of 12 and 14. So how and why did I get back into tennis? The answer has three parts.

Part One: Love of the Game.
My Mom and oldest brother, Ken, have been playing tennis a combined total of over 70 years. My mom still takes lessons and plays Marine League tennis while Ken is rated 4.5 in the NTRP (National Tennis Rating Program) and plays men’s and mixed doubles in a USTA (United States Tennis Association) league. They have a passion for the game. When I’d come home from school, Mom would smile and say “I won my match today.” My brother even “reports in” his match results to me over the phone or email. It’s much more than “Eric, we won 7-5, 6-4.” Ken will talk about how he felt, his new strings, how many aces he hit, an adjustment he made with his grip, how his partner played, his opponents, etc. They both appreciate the physical aspect to the game as well as the cerebral one.

Part Two: Rundown
In the summer of 2011, I suffered a common running injury, a stress fracture. This was in my hip and took a few months to heal. I experienced running-related injuries in the past including pulled hamstring and groin muscles, ankle sprains and even a quadricep tear. I enjoy the outdoors and the “runner’s high”, but the repetitive movement and pounding on my body was too much. After thousands of miles on the road I decided to make a change. I needed a new challenge.

Part Three: Something For Me
The last piece of the puzzle was my decision to do something for me. What do I mean? As a husband and father of three, I often put others’ activities in front of my own. Yes, I’ve always worked out and stayed active, but I couldn’t own it. Heather has her gardening and landscaping, Kyle and Bruce have their baseball, soccer and swimming and little Roy has his teething ring. I “decided” to make tennis my sport. So in the spring of 2012 I demoed a few tennis racquets and started hitting against a backboard. That summer, I signed up for tennis lessons through the Middleton Recreation Dept. In my class, I met a guy who is a team captain for a 3.5 men’s 40 and over USTA team. He asked if I’d like to join them and I said “Yes!”. League play didn’t start until winter, so Tom and I hit on the weekends and we also played doubles with a few teammates. Winter came and all of the matches were at Nielsen Tennis Academy. What a beautiful facility! I played doubles with three different guys. It was a lot of fun and I improved with every game. My record for the season was 7-1.

Fast forward to this spring. I was contacted by another tennis captain named Kent. We had played doubles a couple times in winter, and he asked if I’d like to join his 4.0 men’s 18 and over team for the summer. Nervously, I said yes. This would be a big step up in competition for me. I immediately noticed the difference in my first match. My partner and I were both new to 4.0 doubles. Our opponents had more pace and kick on their serves, good placement and spin on their groundstrokes and were quick on the court. Even though I had a losing record during the season, I learned a lot, had fun and made significant improvements to all aspects of my game. Do I feel bad about the losses? Nope. At first, I wasn’t sure if I belonged on the team. But it was my third loss when things turned around for me. The points were very close and my partner and I played well. I learned that our team lost all five matches that day. But here’s the positive spin. We were playing the #1 team, and my partner and I lost the least bad. Gotta stay positive, right?

It all came to fruition during the state tournament on Sunday August 11th. My spring/summer league was over, but my winter/spring team had qualified to play in the state tournament. The winners would then go on to Sectionals in Fort Wayne, Indiana. My partner, Tom, and I won our match 6-1, 6-2 and our team won 4 of the 5 matches. Because I had practiced and played guys at the 4.0 level, it was a decisive win. And I have the towel to prove it :-) 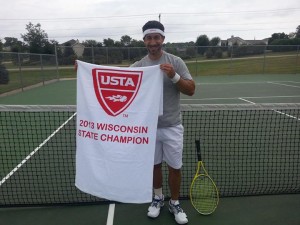