These, I say, these here are egg laying chickens.

Perhaps you were expecting a healthy recipe, fitness tip or exercise of the day? In today’s blog we’re talkin’ chickens. Cluck, cluck.

In the fall of 2012 my wife and I built a chicken coop. Heather had experience raising chickens and goats when she was growing up in Michigan. I, on the other hand, grew up in Los Angeles where the closest I got to a chicken was at the grocery store. Actually, my pre-school had a few farm animals.

Our interest in chickens was primarily for eggs but also to teach our kids where food comes from and how to take care of animals. I still get excited when I look into a nesting box and see an egg. That spring we purchased a few egg laying chickens from a friend of a friend. Once the chickens settled into their new home (coop and fenced enclosure), we experienced more benefits. First, chicken poop makes great compost. Just mix 1/2 chicken poop and 1/2 hay. Second, we found it relaxing to watch the chickens scratch the ground, look for worms or take a dust bath. When Heather was in graduate school, she had a large fresh water fish tank in her apartment. As a stress-reliever she would often sit and watch the fish. Ahh, that’s the reason why dental offices and health clinics have fish tanks in their waiting rooms. Third, our chickens have a fondness for celery ends, carrot shavings and old fruit. While most of our kitchen waste goes into our Mantis Composter, “the ladies” still like their treats.

Having chickens has been a great experience. That’s why we picked up nine more chickens last month. The more the merrier, right? We bought them from a woman in Cambridge who breeds show chickens. The ones we purchased had slight flaws but were still colorful and would be good layers. We selected two Americaunas (they lay blue eggs), three speckled Hamburgs, three light brown Leghorns and one Campine.

Before introducing them into the existing flock, we built an adjacent enclosure. We read about the importance of quarantining the new pullets to avoid possible spread of disease and to reduce stress to “the ladies”. Stress can disrupt egg-laying. So now the ladies and the girls can interact and look at each other with no contact. Just a few more weeks until the new chickens start laying.

“I say, it’s so hot, the hens are pickin’ up worms with potholders.”
— Foghorn Leghorn 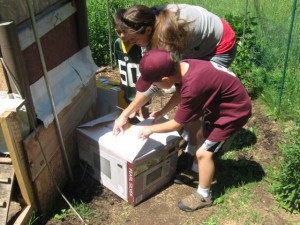 What’s in the two cardboard boxes? 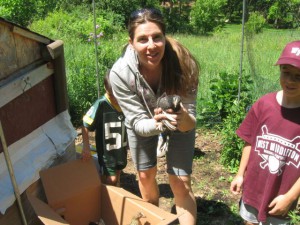 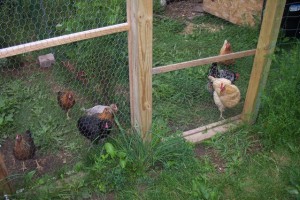 Two of the ladies check out the young girls. 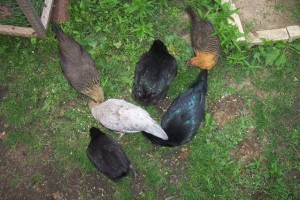 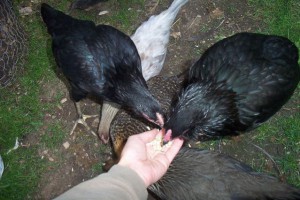