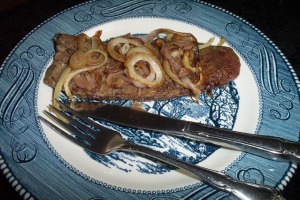 When I mention cooked liver, what do you think of? A rubbery piece of meat with a metallic iron taste and grainy mouthfeel? Or maybe foie gras and sweetbreads? My mom use to make awesome chopped chicken liver sandwiches when I was growing up. Yum. My brothers and I still talk about it to this day. She would sauté chicken liver in a cast iron skillet with mushrooms and onions and serve it up on a bed of sticky white rice, Mom Foxman style. Any extra liver would go into a bowl with some sliced hard boiled eggs and a little mayonnaise. With the side of a fork, she would mash and mix the ingredients together. Spread in between two pieces of bread and, voila, a chopped chicken liver sandwich. At lunchtime, friends would ask to feel how heavy my sandwich was. Mom didn’t skimp. I have such fond memories of eating those sandwiches and always associate good home-cooked meals with my mom. As a matter of fact, I just got off the phone with her, and she suggested adding some raw chopped yellow onion to the liver mixture. Thanks, Mom.

In America most organ meats are seen as throw-away or scrap pieces. While in many other places of the world, people eat the entire animal. Nothing is left to waste. We often associate the “need” to eat things like tripe, liver and heart with developing countries or perhaps in many of our families’ pasts when people did not have much money and had to “make do” with what they had. Nowadays many high end restaurants romanticize these peasant foods (perhaps the foods of their grandparents and great-grandparents) by cooking with unpopular animal parts . . . and charging a fortune.

When I told my oldest son that I was cooking up liver, he responded by saying “Ick”. I then asked him if he knew what liver was. He said “No”. I told him where the liver was in the body and reminded him what chicken breast, ground beef and tilapia filets were. . . the bodies of animals. Then he said “Oh”.

How was I going to prepare the beef liver? I checked a few recipes online and found a few ideas. The first thing I did was to rinse the meat and then put it in a casserole dish. I then covered the liver with milk and let it soak for an hour.

This is suppose to help lessen the bitter taste. You will notice blood coming out of the liver. While the liver was “marinating”, I heated up my favorite seasoned cast iron skillet. Once hot, I added a tablespoon of olive oil and some sliced yellow and red onions. 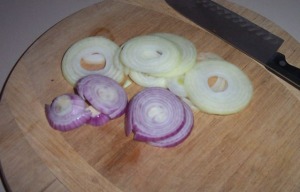 Remember that a hot pan with room temperature oil will help the food not to stick. I added a dash of salt and pepper and cooked the onions until soft. I like onions with some texture and didn’t want them to breakdown too far and caramelize. Be sure to stir frequently to prevent burning. I removed the onions from the heat and set aside for later.

Next I dried the liver pieces. In a shallow dish, I added 1/2 cup of all purpose flour with a 1/8 teaspoon of salt and pepper. I gently coated the meat in the flour and set them in the hot skillet with another tablespoon of oil. Depending on the thickness of the liver, cook about 3 to 4 minutes on each side. Just like a fine steak, let the meat cook and don’t disturb it by moving it around or poking it. Also do not overcook the liver or it will be chewy and rubbery. In the last minute of cooking, return the cooked onions to the skillet. Just remember that when you take the meat off the heat, it is still cooking. So if you try to cook the meat until it “looks” done, chances are that it will be overcooked by the time you plate it up and eat it. There’s one more slice of liver left in the fridge. I know what I’m having for lunch. Enjoy!