It’s funny how anniversaries seem to sneak up on me. Just ask my wife, Heather :-) So it comes as no surprise that my 20-year personal training anniversary is this month. Wow, 20 years ago seems just like yesterday. During college (1991-1995) I became interested in personal training as a profession and asked a friend, Bruno Perron, how he got into the industry. He said the first thing I needed to do was to get certified through A.C.E. (American Council on Exercise). To this day, A.C.E. is recognized as one of the premier fitness certification organizations. Then he said I would need to be patient and work my tail off. Building a clientele wasn’t going to happen over night. So my journey began in personal training a long time ago. Sounds like the beginning of a Star Wars movie, “A long time ago in a galaxy far, far away [Los Angeles] . . .”

Well it all started when I approached several health clubs in the South Bay and asked if they needed a personal trainer. I was 22 years old and had recently graduated from the University of California at Irvine with a BS in Biology. Some gyms said NO and told me that they were not building a personal trainer program, just their memberships. As an aside, this was around the time when many gyms and health clubs were discontinuing working with independent contractors and just hiring personal trainers to be on staff. It was an interesting transition for the industry. The last club I visited was just a few minutes from where I lived. I brought a copy of my resume with me and talked to the Operations Manager. That was a fortuitous meeting as Jodi told me that they only had one personal trainer and were looking for more. From then on, I became a permanent fixture at that gym. If I was not training a client, I was working out there. If I wasn’t working out, I was standing at the front desk in the lobby greeting members and offering free lessons. That was, in fact, how I started with my first client, Susan. I didn’t have a website (remember this was 1995), and there was no FaceBook, Pinterest, Angie’s List, Yelp or Google to promote my services. I had my business logo decal on the back of my SUV, a box of fliers and 500 business cards. At the time, I called myself “Eric’s BodyShoppe”. Hey, I thought it was catchy.

Over a short period of time, I developed a reputation for timeliness, attentiveness and being able to tailor exercises to match people’s abilities and interests. And I always knew that other gym members were watching. Unlike training in my private studio nowadays, I was on display so to speak. The gym members could see my clients get in shape, perform exercises that were safe and effective . . . and all the while have fun doing it. The other personal trainer wasn’t too happy about this. In so many words, he let me know that I was “cutting into his business”. A couple years later, it was discovered that he was not even certified as a Personal Trainer and was taking money “under the table”.

I have to admit that I was at the gym so much that many gym members actually thought I was the owner. If only, right? Walking through the front doors made me feel like a character in the TV show Cheers. No, people didn’t shout “Norm!” at me, but you get the idea. Training people never really felt like work. Still doesn’t. I had several bosses over the years (Personal Training Directors, Operation Managers, General Managers, etc) who tried to assign volume/sales goals for me, but that kind of pressure never worked. I came and went as I pleased and trained whom I wanted.

New trainers came on board over the years, and I did my best to make them feel welcome. Instead of strutting around like a big dog, which is hard when you’re 5’7″, I reassured them that there were plenty of gym members to go around. We all had different styles, backgrounds and approaches to personal training and we’d attract different clients. Two Personal Trainers, Joi and Marie, became close friends. There was friendly competition and a camaraderie that I had not experienced before. We encouraged each other, supported each other and the gym became a great place to work for 9 1/2 years until I moved to Middleton, WI in 2004. You might ask what happened to the South Bay gym where I got my start? It went out of business in 2005, and it is now the location of my mom’s favorite grocery store, Sprouts.

My goal is, and has always been, to make health and fitness fun and accessible. To cut through all of the hype, fad diets and high risk workout programs. People might hire me for a short term goal, like a 5k walk/run or an upcoming Caribbean vacation, but they quickly understand that it’s all part of the bigger picture of living a healthy lifestyle. It’s about being able to kick the soccer ball with your son, push your daughter on the swing, go for a walk with your friends or chase your wife around the house :-) It’s about living and enjoying life now. Twenty years goes by fast, and I have done my best to walk the walk and not just talk the talk. I’ll see you in another twenty!

Gotta stay in shape if I’m gonna run down the dunes will all three boys! 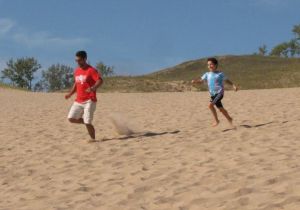 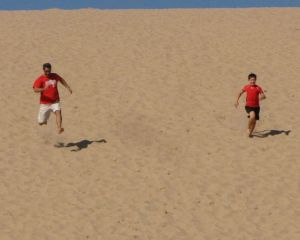 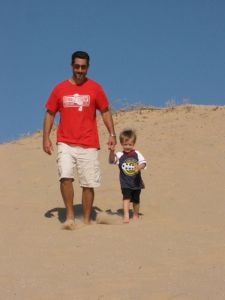