Before you scroll down to look at the pics of the two beef tongues that look more like Chestbursters from the Alien movies, PLEASE keep reading. They were absolutely delicious and flavorful, easy to prepare and much leaner than I expected.

With our quarter steer that we ordered several months ago, the butchers from Lodi Sausage Company and Meat Market, threw in two tongues. I guess tongue is not popular. As a matter of fact, we asked them for the liver and a few other “throwaway” parts. The tongues sat in our basement freezer for some time, and then Heather pulled them out the other week and asked what we should do with them. Given that a cow uses its tongue pretty much non-stop, my first thought was to cook it low and slow in the crockpot. This was confirmed when we checked out some recipes online. My initial concern was that it would have an “organy”, “minerally”, “irony” taste. Nothing could be further (or farther) from the truth. The beef tongue was AWESOME! Tender and flavorful like filet mignon. No kidding.

We set the crock pot on Low over night with carrots, onions, celery, salt and pepper and a bay leaf. In the morning after letting it cool Heather sliced a small piece and took a taste. She almost literally ran into the living room and said “Eric, you need to try this. It tastes like filet mignon.” Tender, juicy and for you foodies out there, had a great mouth feel. It had a nice chew to it. Not grainy or slippery. Now, what to do with them? She sliced both tongues — sounds like it would hurt: ) — and put them into two containers. The first was for beef tacos. We coated them with some Mexican seasonings (cumin, Mexican oregano, cayenne pepper, garlic powder, onion powder, paprika and dried chili powder) and gave them a quick saute in olive oil. We served them in warmed corn tortillas with salsa, avocado and a little cilantro. I must have had five or six. They were awesome!

The remaining beef tongue was for our beef with barley soup. And yes, we used the broth from the crock pot. And no, the broth was not fatty. I had read a few online recipes where fat from the tongue seemed to be an issue. People felt that the beef tongue was fatty and the “juice” was too greasy. Not in our case. Maybe it was the way the butchers cut the meat or that these grass fed cows were just leaner? Either way, we did not have to skim fat off the surface of the broth.

There you have it. An unpopular and unattractive piece of beef that turned out fantastic. It made me realize again that we are so conditioned to purchasing and eating only certain cuts and parts of the cow, chicken, pig, etc. All perfectly cut and individually packaged. In my opinion, that really disconnects us from our food. And that is why the last chicken we culled from our flock was done by yours truly. It was a great experience.

So the next time you go to your butcher, see what “throwaway” pieces they have. You might be pleasantly surprised by what culinary delights you can prepare. 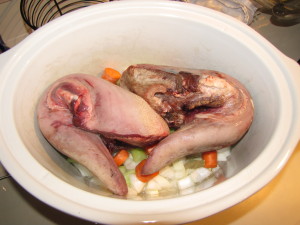 This is not a pretty picture. I was hesitant to include this pic because, let’s be honest, the tongues look frightening. 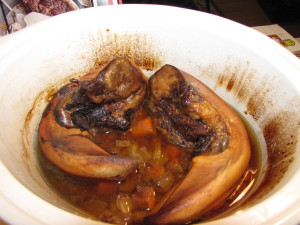 After they were cooked, they didn’t look much better. 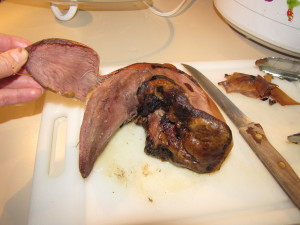 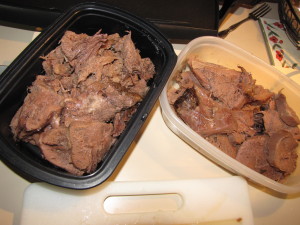 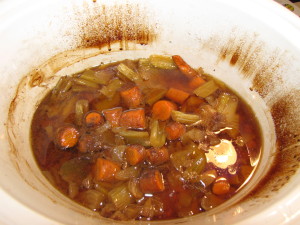 Let’s not forget the broth. That’s where the flavor is. Not some bullion cube. This is the real deal. All the flavor.